If Google’s Management Doesn’t Use Google+, Then Why Should You? 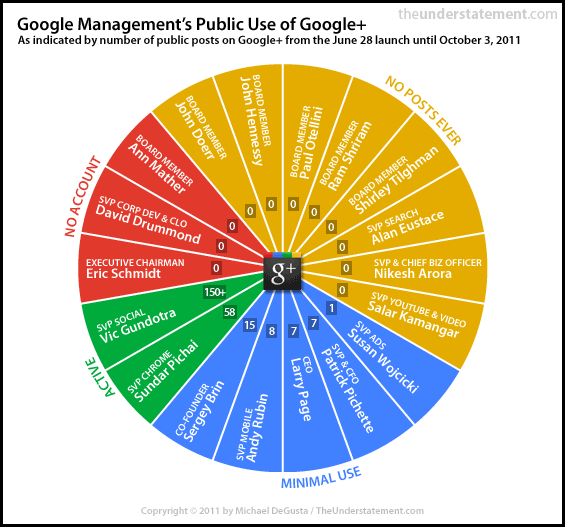 One of the most important rules in software is to eat your own dog food. The concept is simple: If you have confidence in your product, you use it.

Perhaps somebody should tell that to Google’s senior management, because the people in it are not eating their own dog food when it comes to Google+.

During the madness that was the launch of the iPhone 4S, we stumbled across an interesting post by Michael DeGusta. DeGusta decided to analyze how often Google’s senior management uses Google+. He counted how many times the company’s senior management, SVPs and board members have publicly posted on Google+.

The results aren’t pretty. Co-founders Larry Page and Sergey Brin have posted publicly on Google+ 22 times. Executive Chairman Eric Schmidt doesn’t even have a Google+ account, nothing short of an embarrassment when company bonuses are tied to social media success.

When you get to Google’s six SVPs, the story doesn’t change much. SVP of Video Salar Kamangar and SVP of Search Alan Eustace have never publicly posted. SVP of Ads Susan Wojcicki has publicly posted once and SVP of Mobile Andy Rubin has posted eight times (neither have posted since August). The only two people on Google’s management team I’d consider “active” are SVP of Chrome Sundar Pichai (58 posts) and SVP of Social Vic Gundotra (150+ posts).

Here’s another shocker: Not one of Google’s six independent board members have ever posted publicly on Google+.

Let’s start out with addressing a few caveats. First, these senior Googlers could be posting a ton privately and we simply don’t know it. But it’s more likely that their lack of public engagement is indicative of their lack of engagement overall. This is especially true of Google’s management, which has an incentive to promote Google+ publicly.

You could also argue that the SVP of search or ads shouldn’t be expected to be heavily engaged on Google+, but given the fact that Google intends to integrate Google+ into everything it does, I don’t buy that argument either. When Google+ first launched, Gundotra told me personally that Google+ is an extension of Google itself, thus why the company chose the name.

It doesn’t matter how you slice it: If Google’s management truly believed in Google+ as the future of the company, they would be more engaged. Not being connected to a product that has such a direct correlation to the company’s future is dangerous. This is about leading by example. Why should Google employees be excited about Google+ if their managers aren’t excited?

The same rule applies to Google+’s million of users. The social network has more than 43 million users now and is being heavily promoted by Google. But if its creators aren’t interested enough in staying active, what’s to say its users won’t get bored just as fast?

Google’s management is a busy group, but having only three members of its management team post more than 10 times sends a terrible message. It makes people question the commitment Google has to social.