How I Found My First Big Job

There are at least a few success stories among the masses of unemployed 20-somethings. But those successes are taking a long time to achieve.

Among employed recent college graduates, just 69% landed their job within six months of graduation, according to a May report by the John J. Heldrich Center for Workforce Development at Rutgers University in New Jersey. For those without a college degree, the lead time can be even longer, experts say, as college graduates snap up the few opportunities that their non-college-educated counterparts might otherwise have had.

Two recent college graduates and one recent high-school grad describe their job hunts, and explain how they finally landed that first big job: 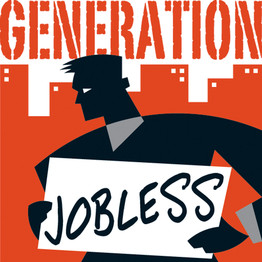 Americans 25 and under face one of the toughest job markets in modern history. This week, The Wall Street Journal explores their stories.

I transferred to [University of Texas] my sophomore year and declared myself a radio, TV and film major. I realized that it would be very difficult to get a job after college, so I did a lot of internships.

I started looking for jobs in March or April [of senior year]. I probably filled out 20 to 25 [applications] senior year. In total, [I submitted] at least 100. I stayed in Austin [after graduation]. I was an independent contractor at Ivy Worldwide Inc., a social-media marketing company, and was paid $10 an hour, about 15 hours a week.

I saw Facebook was doing a recruiting event on campus. I ended up getting a callback. I kept thinking I was getting closer and closer, so I put a hold on applying for other jobs. I was foolish. After I found out that I didn’t get that job, I went through a period when I was losing sleep.

I wasn’t making enough to support myself, so I was trying to find part-time positions with absolutely anything. I had a friend who had worked at a Starbucks on campus, and she helped me get a position [there]. That [on-campus location] just made it 10 times worse because I was seeing these familiar faces.

In October of 2010, I handed my résumé in [to National Instruments]. At the beginning of 2011, I got an email from a woman at National Instruments asking if I was looking for a full-time position. About a week or two later, we had a phone interview. [Then] I came in for an interview. I started at the end of February.

The Faces of Generation Jobless 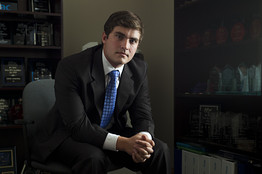 Daymon Gardner for The Wall Street JournalJohn Dodge is an insurance salesman with Aflac in Baton Rouge, La.

Cody Preston, 25, searches online for jobs at his parents’ home in Milwaukie, Ore. 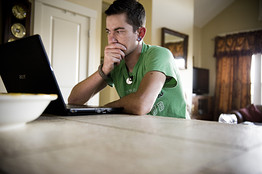 I graduated in 2010 from the University of Pennsylvania, double-majoring in communications and cinema studies.

I waited [to look for a job] until the spring [of senior year]. I interviewed at entertainment companies, but maybe in a sales division, advertising—things like that. I was trying to be open to everything.

After graduation, I spent some time with my mom and dad at home in Great Neck, N.Y. I was looking for a job, but I also was kind of taking a break from doing work, from school.

Then, my friend forwarded me an email for an internship at [film public-relations company] Peggy Siegal Co. She thought it would be perfect for me, so I applied. It started out nonpaid, but they paid me starting in November. Then, I got another internship at the Tribeca Film Festival, working as an assistant for the VP of communications.

I had met someone doing an event at Peggy Siegal, and then again at the Tribeca Film Festival. We had exchanged contact info. She [said], “We have this job opening, I think you’d be a great fit.”

I started in May. I worked at 42West (another P.R. firm) for a few months, and then started a job at Strategy PR/Consulting in September. I’m definitely happy this is where I ended up.

I worked at Burlington Coat Factory in East Hartford last year when I started with OPP (Our Piece of the Pie, a Hartford organization that helps urban youth advance their career and education goals). I was there for about four months.

From College Major to Career

Here’s a look at how various college majors fare in the job market, based on 2010 Census data. 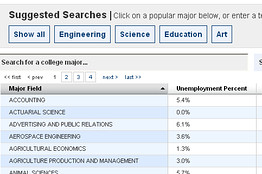 When I first got there I was doing receiving, putting tags on clothes, and after that, I was in the shoe department, doing sales. That was a seasonal job.

After that, I went to Shop Rite. I started off as a cashier, then a bagger, and then I got promoted to the produce department. It’ll be better pay. I’m making $8.25 an hour now, but I’m supposed to get a raise when I have my review, to around $9.35.

I have my high-school diploma, but I had to do an extra year. I wasn’t focused, not going to class. When I have a steady schedule at work, I’ll try to get my barber’s license. I was looking up how much a barber can earn. Everyone needs a haircut. Then, I want to study business management at community college and own my own barber shop.

My current job is all right. I work about 28 hours a week. I’ve been there for about eight months. I get along real well with my boss, my co-workers. I feel real comfortable there.