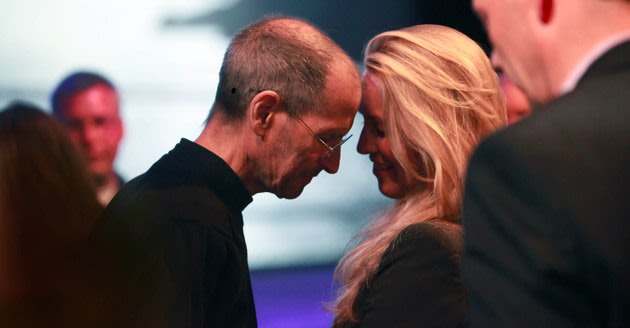 For all of his years in the spotlight at the helm of Apple, Steve Jobs in many ways remains an inscrutable figure — even in his death. Fiercely private, Jobs concealed most specifics about his personal life, from his curious family life to the details of his battle with pancreatic cancer — a disease that ultimately claimed him on Wednesday, at the age of 56.

While the CEO and co-founder of Apple steered most interviews away from the public fascination with his private life, there’s plenty we know about Jobs the person, beyond the Mac and the iPhone. If anything, the obscure details of his interior life paint a subtler, more nuanced portrait of how one of the finest technology minds of our time grew into the dynamo that we remember him as today.

1. Early life and childhood
Jobs was born in San Francisco on February 24, 1955. He was adopted shortly after his birth and reared near Mountain View, California by a couple named Clara and Paul Jobs. His adoptive father — a term that Jobs openly objected to — was a machinist for a laser company and his mother worked as an accountant.

Later in life, Jobs discovered the identities of his estranged parents. His birth mother, Joanne Simpson, was a graduate student at the time and later a speech pathologist; his biological father, Abdulfattah John Jandali, was a Syrian Muslim who left the country at age 18 and reportedly now serves as the vice president of a Reno, Nevada casino. While Jobs reconnected with Simpson in later years, he and his biological father remained estranged.

2. College dropout
The lead mind behind the most successful company on the planet never graduated from college, in fact, he didn’t even get close. After graduating from high school in Cupertino, California — a town now synonymous with 1 Infinite Loop, Apple’s headquarters — Jobs enrolled in Reed College in 1972. Jobs stayed at Reed (a liberal arts university in Portland, Oregon) for only one semester, dropping out quickly due to the financial burden the private school’s steep tuition placed on his parents.

In his famous 2005 commencement speech to Stanford University, Jobs said of his time at Reed: “It wasn’t all romantic. I didn’t have a dorm room, so I slept on the floor in friends’ rooms, I returned coke bottles for the 5 cent deposits to buy food with, and I would walk the seven miles across town every Sunday night to get one good meal a week at the Hare Krishna temple.”

Breakout for the Atari

3. Fibbed to his Apple co-founder about a job at Atari
Jobs is well known for his innovations in personal computing, mobile tech, and software, but he also helped create one of the best known video games of all-time. In 1975, Jobs was tapped by Atari to work on the Pong-like game Breakout.

He was reportedly offered $750 for his development work, with the possibility of an extra $100 for each chip eliminated from the game’s final design. Jobs recruited Steve Wozniak (later one of Apple’s other founders) to help him with the challenge. Wozniak managed to whittle the prototype’s design down so much that Atari paid out a $5,000 bonus — but Jobs kept the bonus for himself, and paid his unsuspecting friend only $375, according to Wozniak’s own autobiography.

4. The wife he leaves behind
Like the rest of his family life, Jobs kept his marriage out of the public eye. Thinking back on his legacy conjures images of him commanding the stage in his trademark black turtleneck and jeans, and those solo moments are his most iconic. But at home in Palo Alto, Jobs was raising a family with his wife, Laurene, an entrepreneur who attended the University of Pennsylvania’s prestigious Wharton business school and later received her MBA at Stanford, where she first met her future husband.

For all of his single-minded dedication to the company he built from the ground up, Jobs actually skipped a meeting to take Laurene on their first date: “I was in the parking lot with the key in the car, and I thought to myself, ‘If this is my last night on earth, would I rather spend it at a business meeting or with this woman?’ I ran across the parking lot, asked her if she’d have dinner with me. She said yes, we walked into town and we’ve been together ever since.”

In 1991, Jobs and Powell were married in the Ahwahnee Hotel at Yosemite National Park, and the marriage was officiated by Kobin Chino, a Zen Buddhist monk.

5. His sister is a famous author
Later in his life, Jobs crossed paths with his biological sister while seeking the identity of his birth parents. His sister, Mona Simpson (born Mona Jandali), is the well-known author of Anywhere But Here — a story about a mother and daughter that was later adapted into a film starring Natalie Portman and Susan Sarandon.

After reuniting, Jobs and Simpson developed a close relationship. Of his sister, he told a New York Times interviewer: “We’re family. She’s one of my best friends in the world. I call her and talk to her every couple of days.” Anywhere But Here is dedicated to “my brother Steve.”

6. Celebrity romances
In The Second Coming of Steve Jobs, an unauthorized biography, a friend from Reed reveals that Jobs had a brief fling with folk singer Joan Baez. Baez confirmedthe the two were close “briefly,” though her romantic connection with Bob Dylan is much better known (Dylan was the Apple icon’s favorite musician). The biography also notes that Jobs went out with actress Diane Keaton briefly.

7. His first daughter
When he was 23, Jobs and his high school girlfriend Chris Ann Brennan conceived a daughter, Lisa Brennan Jobs. She was born in 1978, just as Apple began picking up steam in the tech world. He and Brennan never married, and Jobs reportedly denied paternity for some time, going as far as stating that he was sterile in court documents. He went on to father three more children with Laurene Powell. After later mending their relationship, Jobs paid for his first daughter’s education at Harvard. She graduated in 2000 and now works as a magazine writer.

8. Alternative lifestyle
In a few interviews, Jobs hinted at his early experience with the psychedelic drug LSD. Of Microsoft founder Bill Gates, Jobs said: “I wish him the best, I really do. I just think he and Microsoft are a bit narrow. He’d be a broader guy if he had dropped acid once or gone off to an ashram when he was younger.”

The connection has enough weight that Albert Hofmann, the Swiss scientist who first synthesized (and took) LSD, appealed to Jobs for funding for research about the drug’s therapeutic use.

In a book interview, Jobs called his experience with the drug “one of the two or three most important things I have done in my life.” As Jobs himself has suggested, LSD may have contributed to the “think different” approach that still puts Apple’s designs a head above the competition.

Jobs will forever be a visionary, and his personal life also reflects the forward-thinking, alternative approach that vaulted Apple to success. During a trip to India, Jobs visited a well-known ashram and returned to the U.S. as a Zen Buddhist.

Jobs was also a pescetarian who didn’t consume most animal products, and didn’t eat meat other than fish. A strong believer in Eastern medicine, he sought to treat his own cancer through alternative approaches and specialized diets before reluctantly seeking his first surgery for a cancerous tumor in 2004.

9. His fortune
As the CEO of the world’s most valuable brand, Jobs pulled in a comically low annual salary of just $1. While the gesture isn’t unheard of in the corporate world  — Google’s Larry Page, Sergey Brin, and Eric Schmidt all pocketed the same 100 penny salary annually — Jobs has kept his salary at $1 since 1997, the year he became Apple’s lead executive. Of his salary, Jobs joked in 2007: “I get 50 cents a year for showing up, and the other 50 cents is based on my performance.”

In early 2011, Jobs owned 5.5 million shares of Apple. After his death, Apple shares were valued at $377.64 — a roughly 43-fold growth in valuation over the last 10 years that shows no signs of slowing down.

He may only have taken in a single dollar per year, but Jobs leaves behind a vast fortune. The largest chunk of that wealth is the roughly $7 billion from the sale of Pixar to Disney in 2006. In 2011, with an estimated net worth of $8.3 billion, he was the 110th richest person in the world, according to Forbes. If Jobs hadn’t sold his shares upon leaving Apple in 1985 (before returning to the company in 1996), he would be the world’s fifth richest individual.

While there’s no word yet on plans for his estate, Jobs leaves behind three children from his marriage to Laurene Jobs (Reed, Erin, and Eve), as well as his first daughter, Lisa Brennan-Jobs.